STUNNINGLY talented singer and naturally gifted actress Sunanda Sharma is one of India’s best-kept secrets, but huge recent successes mean more people are getting dazzled by the rapidly rising star.

Her song Pagal Nahi Hona has been a huge success since it released earlier this year and clocked more than 76 million views on YouTube. This adds to an impressive number of songs the powerful singer has delivered, including 2019 hit Duji Vaar Pyar, which has been viewed more than 360 million times on YouTube.

The multi-talented star has already acted in the film Sajjan Singh Rangroot and showed that ability to perform in the recent music video of B Praak song Baarish Ki Jaaye, where she stars opposite Nawazuddin Siddiqui. That video has been viewed over 330 million times and showed her acting prowess. With an album on the way, more songs and acting offers being lined up, she is one to watch and find out more about.

With that in mind Eastern Eye caught up with Sunanda Sharma to talk about music, acting, her success and future plans. The free-spirited singer and actress answered in Punjabi and peppered answers with her infectious laughter.

What is it that first connected you to music and singing?
Just nature and the environment I grew up in. I am a Punjabi girl, so love to sing and dance, and that inspired me, I guess.

You have delivered a lot of hit songs in a short space of time, but which of them are closest to your heart?
I love all my songs, but if I have to choose then Duji Vaar Pyar and Pagal Nahi Hona. I have been able to sing for both songs and act in the music videos. Both songs have been received so well and also gave me scope to perform in the music videos.

Who has been the most interesting person you have worked with?
(Laughs) I think I am the most interesting person I have worked with. But jokes aside, I have been fortunate enough to work with some great people, from the studio to the music videos. I have really liked working with everyone, whether they have been co-actors, directors, lyricists, music directors or technicians in the studio. You get to learn something from each person and ultimately evolve as an artist. They have all gifted me with wonderful experiences.

You have also shown some amazing acting skills, including in your music videos. Is that something you will pursue further?
(Laughs) Do you think I am a good actress, Asjad?

I think you are a great actress…
Yes, acting is something I will pursue further for sure. I have been getting interesting offers, but I want to do roles that are challenging, like the work I did in (music videos) Baarish Ki Jaaye and in Pagal Nahi Hona. I want acting projects like that where I am in competition with myself and have to raise my level. They should be roles that make people feel something, but I should also feel like I have done something. I don’t want to do those “pretty girl type” of roles, who are just there in the frame smiling. So, I am waiting for the right role. If I get something challenging, then yes, I will definitely do it.

How much does the amazing success of your song and music video for Pagal Nahi Hona mean to you?
It feels great! I think every human has that feeling when their hard work is appreciated. I am so happy that Pagal Nahi Hona has received so much love. I will tell you a fun fact behind that song – it was actually created three or four years ago. Things didn’t work out for a long time. We finally got to release it this year. The positive reaction has been overwhelming and worth the wait.

Everybody loves Sonu Sood right now for the heroic work he has done during the pandemic. He stars opposite you in the Pagal Nahi Hona video. What was he like to work with?
He is a very nice person, extremely down to earth and so professional. He was punctual on set. Our call time would be 6am-7am. He was never late, was so easy to work with and was so nice to everyone. I really enjoyed working with him. He is so humble and I learned a lot from him. 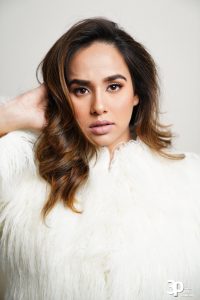 What was it like working with Nawazuddin Siddiqui?
He was also the same. A very humble, kind and extremely down-toearth person on set. I learned a lot from him. I was a huge fan of his from before, but when we first met, he was aware of my work and liked it. He gave me the confidence to perform on screen, which made it easier for me.

How are you able to generate so much soul and emotion in your voice?
Nature and a higher power have filled me with emotions. (Laughs) All I have inside me are emotions and more emotions. That all comes out when I sing.

You are multi-talented. What is the plan going forward?
My priority will always be my singing. Like I said, I am interested in exploring acting further and will wait for the right project to come along. Talks are ongoing. Let’s see what happens. But singing is my number one focus because that is what gave me recognition, got me noticed and made my name. I have an album ready, which I am looking forward to sharing with everyone. We are just waiting for the Covid situation to calm down.

Millions are now listening to your songs, but what music do you enjoy?
I like Noor Jehanji a lot and listen to a lot of her songs. I also listen to a lot of songs by Reshmaji. There are a lot of artists whose music I enjoy and have inspired me in some way. I really like romantic numbers and Sufi songs.

A lot of people acquired new skills during lockdown. Did you learn anything while stuck indoors?
(Laughs) I learned cooking! I was trying new dishes every day and have spent lockdown feeding everyone. I enjoyed that a lot and trying new recipes was not only fun but also therapeutic.

What inspires you away from music?
Nature inspires me a lot and always has done. I am also inspired by animals and the unconditional way so many of them show love. Aside from that, as an artist, I get inspired by everything around me in some way. I don’t feel like you need one specific thing to inspire you and can be inspired by absolutely anything.

With lockdown stopping concerts, how much have you missed being on stage and performing live?
I have missed live performing a lot. That is what I do best and it was taken away during lockdown. I love to be on stage and feel the energy of audiences. I feel like a big part of my life went missing suddenly and I am sure other artists have felt the same.

Why do you love music and singing?
I am not sure how to answer that question as it has just been a part of me for as long as I can remember. When I am really happy I listen to loud music, when I feel down I will listen to slower music. So, like many, I have that connection with music, not just as an artist, but also as a listener. When I am listening to spiritual Gurbani (hymns) in the morning, it enables me to be at one with the day ahead. So, music for me is everything. I love singing. I love music.