One in 5 Americans surveyed say they own an Amazon Echo smart speaker (from $39), supported by new data published by Trading Platforms, a leading education and comparison platform for online traders.

This is consistent with Edison Research and NPR’s Smart Audio Report findings.

Google Nest is its next closest competitor with roughly 8 percent of the U.S. market share, according to Trading Platforms.

Considering how many of us are confined to our homes because of COVID-19, we may be using these devices more, too.

“Before the pandemic, most people used their smart speakers for getting the weather and listening to music. But over the past year, they’ve become our meditation guides and yoga teachers, our homework helpers and bedtime story readers, the way we discover new recipes and local takeout spots – and so much more,” says Katherine Prescott, Founder and Editor of VoiceBrew, which distributes an email newsletter devoted to smart speakers, Monday through Thursday. 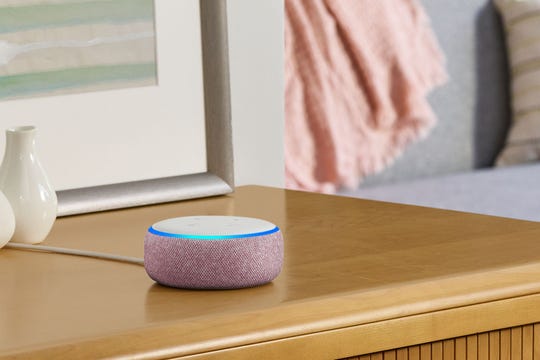 An Amazon Echo Dot smart speaker on a side table. (Photo: Amazon)

“There’s something so magical about these devices – like we’re living in the future,” Prescott adds.

You know the drill: wake up your hands-free speaker by saying its wake word, usually “Alexa,” followed by a question or command, such as a request to control a smart home device.

Whether you’re new to Alexa or a longtime fan, the following are seven fun things to try – including a couple of Prescott’s favorites.

Office 2021: Microsoft will release productivity software for Windows and Macs later this year

LastPass alternatives: Here are other options, including Apple, Google

It’s been a tough year.

Introduced during the pandemic, you can send a virtual hug to any of your Alexa contacts by simply saying “Alexa, send a hug.” You’ll be asked to whom the high-tech gesture should go. Or you can say “Alexa, send a hug to [person’s name].”

Once confirmed, Alexa will send a virtual hug to your contact’s smart speaker. Their device’s ring light will illuminate in yellow, and when prompted, Alexa will say “[Your name] is sending you a hug!” (and display the message in the Alexa app).

Amazon.com started as an online bookseller 27 years ago, and now they’ve come full circle with one of its latest Amazon Echo features: asking what books to read.

Simply ask “Alexa, what should I read next?” and your trusty digital assistant will let you filter by genre and authors, as well as share star ratings and reviews.

What’s even more impressive is the artificial intelligence (A.I.) behind the scenes: Alexa will suggest titles based on your past book purchases on Amazon.com, Audible, and Kindle.

Alexa can also give recommendations in a specific genre (such as “how about some science fiction?”), in a specific format (like “recommend an audiobook”), and by a specific author (“find new books by Stephen King,” and so on).

If you happen to have someone in your home named “Alexa” or “Alex,” thankfully you can change the word that wakes up your smart speaker.

Simply open the Alexa app on your smartphone to select one of the other words from the list: “Amazon,” “Echo,” or “Computer” (likely a nod to the voice-enabled computer on the Star Trek television series).

Inside the app, go to Settings > Select your Echo > Wake Word.

Prescott says renaming a smart speaker is also handy if you have more than one in a household, and you don’t want multiple devices to be activated when you say the wake word.

Want to have fun and help advance A.I. at the same time?

Specifically, there are teams competing in the Alexa Prize Socialbot Grand Challenge 4, Amazon’s global university competition to advance conversational A.I. The challenge is to create a chatbot that can converse coherently and engagingly with humans on popular topics for 20 minutes.

To end a conversation, say “Stop,” and you will be prompted to provide a verbal rating and feedback. To try another socialbot, say “Alexa, let’s chat” to start.

Connect to a Bluetooth speaker

This is one of my favorite Amazon Echo tips, for music lovers who want better audio.

If you have a premium Bluetooth speaker at home, such as a soundbar, did you know you can wirelessly connect it to your Amazon Echo?

To do this, open the Alexa app on your smartphone > Devices > Echo and Alexa > and select the Echo device you want to pair. Then, select Bluetooth, and you’ll see devices that your Echo has paired with previously, or you can pair with a new device altogether.

There are several smart speaker games you can play alone or with friends.

Prescott says Hey Robot, from Frank Lantz’s Everybody House Games, is one of her favorites, and there is now a free digital version to compliment the Kickstarter-funded board game of the same name.

The rules are simple: Pick a card and try to get your smart speaker to say the word (or any form of the word), without saying the word yourself. For example, if the word is “Pineapple,” then ask Alexa something like “What is the biggest fruit exported from Hawaii?” or “What fruit symbolizes hospitality”?

When you play the digital version, perhaps under lockdown, place your Amazon Echo speaker (or Google Home/Nest device) near your computer and launch a Zoom chat with friends. Only one speaker is needed.

In the Versus version of the game, the teams take turns picking a card and asking the robot one question to try to get it. First team to 14 points wins. In the Co-op (cooperative) version, everyone is on the same team and you have 16 turns to get as many points as you can.