BERLIN — Shortly after inviting a Times of Israel reporter into his apartment in the Berlin neighborhood of Wilmersdorf, Max Malkiel poured a welcome shot of vodka. It would be the first of several thrown back Russian style, chased by a plate of homemade pickles.

It’s natural that the Tajik-born chef and YouTube sensation would host a visiting reporter with the same warm informality that makes his cooking tutorials so popular. Though his recipes are far from haute cuisine, his soothing voice and easygoing demeanor — along with simple-to-follow instructions — have netted him well over 100,000 YouTube subscribers across three channels.

During our January visit, Malkiel was working as a prep cook at Layla, a popular Berlin restaurant run by Israeli celebrity chef Meir Adoni. Still, he preferred to whip up a “modest Bukharian meal” at his own apartment, serendipitously scheduled just weeks before the pandemic would put such meetings on hold.

“Modest” is a relative term, of course. Alongside the free-flowing spirits, Malkiel and his wife Miri (“she cooks much better than me, I admit it,” he said) set out an array of homemade salads and tall stacks of the warm, freshly baked Bukharian bread the chef has become known for.

“I’m not a chef who comes up with new recipes. My goal is to reach the savta level, the grandma level. We look for grandma recipes and try to pass them on, to make food that everyone can make at home with simple ingredients and simple equipment,” Malkiel said, piling a mountain of plov — a Caucasian dish of rice and meat — onto this reporter’s plate. (When I was unable to put a dent in the portion, which could have fed a family, he sent me home with a plastic container full of leftovers.)

Malkiel entered the food industry nine years ago at the relatively late age of 40 while he was living in London, and has worked at a number of eateries since. He lived in Israel for 12 years before moving to London in 2003.

“I’ve been an amateur cook my whole life, but I always thought to myself, tomorrow, tomorrow I’ll work at a restaurant,” he said. “But when I turned 40, I realized there may be no tomorrow. When you’re 40 you start seeing the other side.”

After getting divorced from his previous wife, Malkiel took a shot and emailed a newly opened Tajik restaurant — a popular ethnic cuisine in London — asking if they could use a beginner’s help.

It was around the same time in 2012 that Malkiel launched his Russian-language YouTube channel on a lark, after a friend asked him for the recipe for Tajik sambusa, a dough pocket filled with meat, cheese, or vegetables. “Suddenly, people started watching,” he said. He now has additional channels in Hebrew and English.

Eight years later, Malkiel is comfortably padding his monthly salary, and has plans to make his videos his primary source of income. All his subscribers are organic, he said, and he has no problem sharing how he’s attracted them — nor how much money he makes from his channels. In fact, in his video titled “How Much Money Do You Make on YouTube?” (Hebrew video) he explains exactly what he earns, and how. 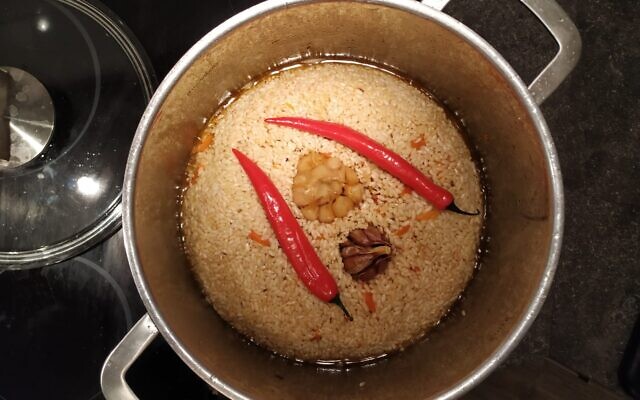 “I don’t want to get rich, I want to be financially independent. And I hope we’re getting there. It’s a lot of hard work, and many years of persistence,” Malkiel said. “But money isn’t fanatically my goal. If someone told me I wouldn’t make any money off of it, I’d still be shooting the videos. A lot of it is about getting feedback from people. It’s solipsistic. Suddenly there are people who think like me, who like what I do — it makes me happy.”

Despite his many videos and years of culinary experience, Malkiel still describes himself on his Facebook page as a “professional thinker and amateur chef.” 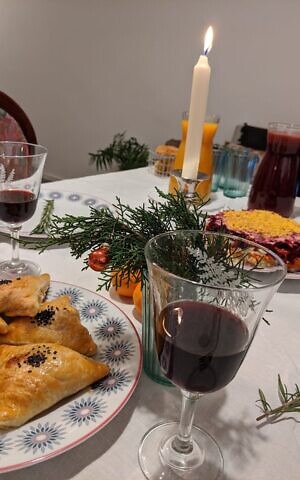 Chef Max Malkiel’s spread on the Russian holiday of Novi God, which is celebrated on New Year’s Eve. (Courtesy)

“I’m not the greatest chef in the world,” he said. “The thing is, the real reason people watch me is because of the talking. It’s not because I’m wise. It’s some gift that Hakadosh Baruch Hu, the Almighty, gave me.

“I am a very calm person, and I speak like this, and it calms people down. I’ve got quite a few vegan people who watch my meat recipes regularly! Why would they do it? They would never prepare these recipes. They watch it because they say they put my videos on before they go to bed, and they watch it, and it calms them down, and they go to sleep,” he said.

“Somebody asked me if food can be a form of art, and the answer is, of course — anything can be art if you do it artistically. But what I do is not art — what I do is more therapy. Because I’m a nudnik. But if life gives you a nudnik, make lemonade,” Malkiel said, using the Yiddish term for someone who’s overly persistent.

“What usually happens is [cooking show hosts] are fun, and quick, and speak energetically and charismatically — but when you do the recipe you don’t succeed. I said, I’m a nudnik, I’ll give the recipe, as I say in Hebrew me’alef ad tav, from A to Z. I’ll give you the complete recipe, if you just listen, relax, sit back, you do the recipe and we’ll get it exact, I guarantee it,” he said.

Hebrew learnt on the sly

Despite living in Israel for over a decade ahead of his move to London in 2003, Malkiel was still self-conscious about his Hebrew language skills when he started the Israeli channel. He’d taught himself Hebrew as a child back in his native Tajikstan, though the language was banned during Soviet rule.

“I was ashamed because when I learned Hebrew, I learned as a kid from all the really old people in the synagogue, who spoke with a heavy Arabic accent,” he said.

Malkiel described skipping school to go to the national library with a special government-issued permission slip he’d borrowed from his father, who worked as a translator. The document gave him access to Hebrew texts otherwise off-limits to the general public. 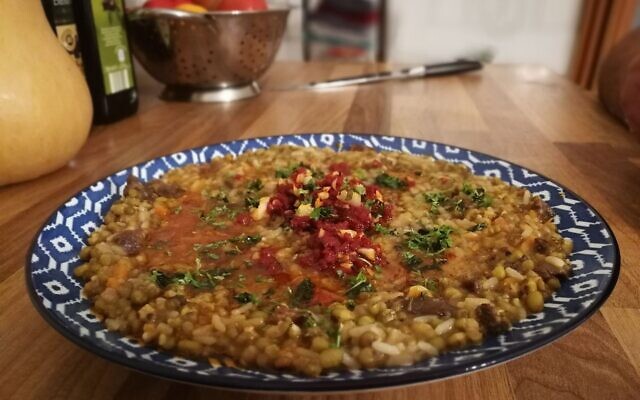 “I knew a little English, because I was a kid, and I got books in English about how to learn Hebrew,” he said. “Hebrew was forbidden because it was a language of religion. You could study Yiddish. You couldn’t find books in Yiddish, but if you did it was okay because the Jewish language of the working masses was okay. But Hebrew was the language of clerical reactionary bourgeoisie.”

Accent or no, Malkiel’s Hebrew page is clearly hitting home with Israelis. He was recently written up in Israel’s largest newspaper, Yedioth Ahronoth, by Israeli celebrity chef Yisrael Aharoni, and his Hebrew-language channel has doubled from 24,000 subscribers in January to over 48,000 today. It features easy-to-follow standards such as hummus, pita, and tabbouleh salad. His own prepared versions of the same dishes generate brisk sales from his dedicated Berlin clientele each week.

“As a joke I call it ‘open source’ hummus, because if you want to make it at home, make it. If you don’t have time, I don’t want to charge money for secrets — I charge money for my labor. I want it to be honest and fair,” Malkiel said.

I call it ‘open source’ hummus, because if you want to make it at home, make it

He’s also proud of the impact his Russian language channel is having on his fellow Tajik countrymen — and women. 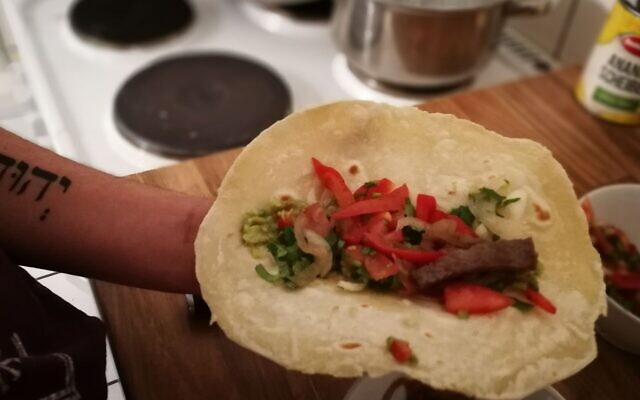 “Today, my country is one of the poorest in the world, so there are a lot of Tajik migrant workers who go to Russia and do the jobs no one wants to do, and they send money back home. And of course they’re stuck there,” Malkiel said. “And suddenly, a Tajik guy on YouTube with a lot of followers is teaching Russians how to cook. And they write compliments to me, because I’m Tajik like them, and it elevates their spirits. It makes them feel like they’re worth something.”

His videos are also making a dent in helping along a cultural revolution in the home.

“I’ve also gotten quite a few emails from traditional young people from Bukhara, from Samarkand, from all of those places, that say, ‘I watch your videos and then I go to the kitchen and help my mom, I help my sister or my wife,’” he said. “For the Western public it may sound like no big deal, but for my country it’s a big deal, and I’m very proud to be a part of this, to have my little influence in this matter. That somebody goes to the kitchen and makes a woman’s life easier, that’s something good for me.” 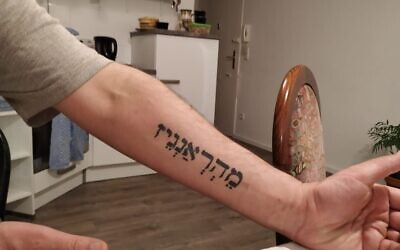 Malkiel and his Tajik-Muslim wife Miri (her full name is Mehrangiz, Persian for someone who inspires love) sport matching Hebrew tattoos on their forearms that are hard to miss, each featuring the other’s name. In addition to being a testament to their love, it also hints at a religious tolerance that might be a byproduct of coming from a country where even in the post-Soviet era secularism is strictly enforced.

His multicultural background came in unexpectedly useful during Germany’s lockdown, when many staples such as yeast were snatched up by terrified panic-shoppers, causing widespread shortages. The phenomenon even earned its own term in German: hamsterkauf, or hamster-buying.

“I was lucky because we did some catering for Israelis, so I got my stock before corona — I had lots of yeast. But getting my hands on flour was also a problem; they didn’t have a lot of flour here,” Malkiel said.

“But you know,” he said, “those people who are not very wise also happen to be kind of racist, and they don’t visit the Muslim shops. So I went to Muslim shops and they were fully stocked — they had everything I needed.”